Home > Ask Our Experts > Heir to Estate: Should I Agree To Fees? 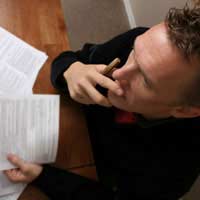 I have been approached by a company who say that I am entitled to some assets left by my late father. They have established that I am the rightful heir to his estate but will not disclose the nature of the asset or the value unless I sign a power of attorney and agree to their fees which equate to 30%.

What are my options?

There are companies that research and find heirs to estates. The professional name is genealogists but they are more commonly known as heir finders. A number of people who are contacted by these companies are understandably sceptical, and in some cases these doubts are not without foundation. There have been many scams reported with people contacting unsuspecting individuals reporting that they are in line to a large amount of money from deceased relatives. They will then be charged an amount of money upfront and that will be the last the victims here from the disreputable heir finding company.

Dying Without Making a Will

However, there are reputable heir finder companies that will notify people who have been left money from an estate. This often happens when a person dies without making a will, known as dying intestate. The heir finders will then use research methods to track down the heirs. The heir finders do charge a percentage, usually up to 25%, and contracts will be signed before the deceased’s details are given. But heir finders are working against the clock in case the heirs find out for themselves about the estate they are entitled to or are notified by others.

The Government and Rules of Intestacy

Every year, around 3000 people die intestate and the affairs of the deceased are dealt with by a government department, specifically the Treasury Solicitor. Under the rules of intestacy, relatives of the deceased are entitled to the inheritance. However, if no one claims the inheritance then this money will end up being claimed by the government. Rightful heirs do have 12 years to claim this money plus any interest that has built up. In fact the absolute deadline for claimants is 30 years but the exact time limit after the 12 year limit is a decision made by the treasury.

Advertising Those who Die Intestate

In order to trace the relatives and heirs of the deceased the treasury will place an advert in local and national newspapers once a week. These advertisements will give the deceased’s name, place and date of birth, and the actual value of the estate. Around 20 of these intestate deaths are advertised every week, and this is where the heir finders come into play. Heir finders try to trace relatives before any other company, or before the time limit expires in order to claim their percentage of the money. Piecing together this jigsaw of deceased and heirs can take a lot of research, and some cases are still ongoing after 20 years of research.

Those who think they may be in line to an estate can research public records themselves. More information can be found at the probate records department of Her Majesty’s Court Services (HMCS). Checking the information on the HMCS website should be the first point of call.

Can I Claim Money From Deceased Father's Bank Account?