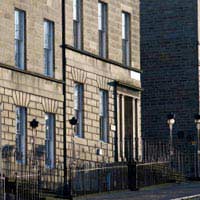 Scotland has its own legal system, which, in many cases, can be quite different from that of England and Wales. That's certainly the case when it comes to the estates of those who die intestate, or without a will and with unclaimed estates, in the country. Their arrangements might seem a little abstruse - at least in the terminology - but are actually quite logical and straightforward, and make the claiming of an estate simple.

When a Scots resident dies without leaving a will and doesn't appear to have a blood relative - or at least not one who's easily traceable - then the person's entire estate, both property and goods, falls to the Crown through the office of the Queen's and Lord Treasurer's Remembrancer (QLTR) under what's known as ultimate heir, or ultimus haeres, to give it the proper legal name.

Where the estate is worth more than £2,000 (estates worth less are deemed not worth the time and effort), the QLTR will advertise it in both the local and national newspapers. The value of the estate will be given along with the last known address of the deceased, and the dates of birth and death, if known.

In the ads, the estate will be described as having "fallen to the crown."

Since the government takes on so much of the work of making knowledge of the estates public, it's relatively easy for those wishing to make a claim.

All that the nearest blood relative to the deceased has to do in order to claim the estate is produce a document known as the Confirmation. To obtain a Confirmation, you would need to present proof of your relationship to the deceased to the Commissary Department in the Sheriff Court where the deceased was living at the time of death.

In most cases applicants will go through a solicitor or a genealogist (who can be legally used to prove family connection). You can apply directly to the Sheriff Court, but you will need not only proof of your identity (photo ID and a recent utility bill), but also a copy of the family tree to show your relationship to the deceased, along with certificates that show the blood line.

The Confirmation appoints you as executor dative of the estate, and once you give it to the QLTR, the estates passes to you after the office has received the completed Bond of Caution from the Sheriff Court.

There is a very definite time limit in which a claim can be made on an ultimus haeres estate. Beginning in January 2008 the unclaimed estate will remain listed for just 10 years from the date of death.

However, that time could prove to be a little different, since the legally the listing has to remain either for that 10 year period or for two years after the estate is advertised in the Edinburgh Gazette, which date proves to be later. Advertisements appear every three months but a death is often not advertised for over a year after it happens. In other words, if the ad appears a year after the death, then the total period in which a claim can be made becomes three years.